Jena lies magnificently framed by the shell limestone slopes of the Middle Saale Valley. But the river that created this landscape was hardly perceptible in it. For the population, there were no connections across the railway and road routes to the floodplain, and the formerly park-like areas became increasingly overgrown. The floodplain could not be experienced throughout.

Therefore, the city council decided on the binding framework plan for the Saale. The aim was and is to gradually develop a designed river landscape that can be experienced.

External location of the BUGA Erfurt 2021

Erfurt invites you to the Federal Horticultural Show in 2021 under the guiding theme "GardenCultureCity".

The BUGA 2021 will not only be anchored in the state capital Erfurt, but will also have an impact at selected locations in the state of Thuringia. Building on the network of these external locations, an umbrella brand of garden tourism destinations in Thuringia is to be developed in the long term.

Jena is therefore proud to have been selected as one of these external locations after an application process.

Vision of an inner-city river landscape

The motto of the Jena project *JenaSaaleParadies* already reveals the vision of an inner-city river landscape of the Saale in Jena. Along the again bright beach of the Saale, blooming gardens, parks and green spaces were and are developed as a coherent cultural landscape, which are closely linked to the urban-cultural life in Jena. In this respect, the motto of the Federal Horticultural Show Erfurt 2021 "GartenKulturStadt" could also stand for the Jena project. Here, beauty and individuality of designed and undesigned nature are combined.

Zwas offers Jena already alone an attractive backdrop due to its magnificent setting with the shell limestone slopes, in the context of the BUGA-outdoor locations the city but above all a special role due to its citywide approach.. Perhaps the closest comparison is with Weimar, which by the writer Adolf Stahr as follows: Weimar is actually a park in which lies a city.

In the case of Jena this is true in a very similar wayd, only thats here not only classical parks form the varied park landscape, but also garden monuments like thehe Lawn Mill Island and the Paradise, modern city parks like the Wenigenjenaer Ufer and the landscape park Saalebogen. Zn addition, these individual facilities are connected by paths that lead through near-natural landscapes even in the middle of the urban fabric of the city of Jena.

The proximity of nature, parks, bustlingm city life and attractive hiking experiences makes Jena in a special way attractive. This pearl necklace of attractive recreational areas did not come about by chance, but was specifically initiated by the city's policy with the decision to implement the framework plan Saale on 25.05.2009 and has been steadily implemented since then.

Actions in and along the Saale

For the BUGA 2021 in Jena various activities can be undertaken in and along the Saale. By boat you can be very close to the river. But also by bike or on foot beautiful parks and natural landscapes can be explored. In 2021, the Landfeste park, which forms the central link between the city centre and the Saale, will be redesigned.

Further information on the Federal Horticultural Show 2021 Erfurt can be found under Links. 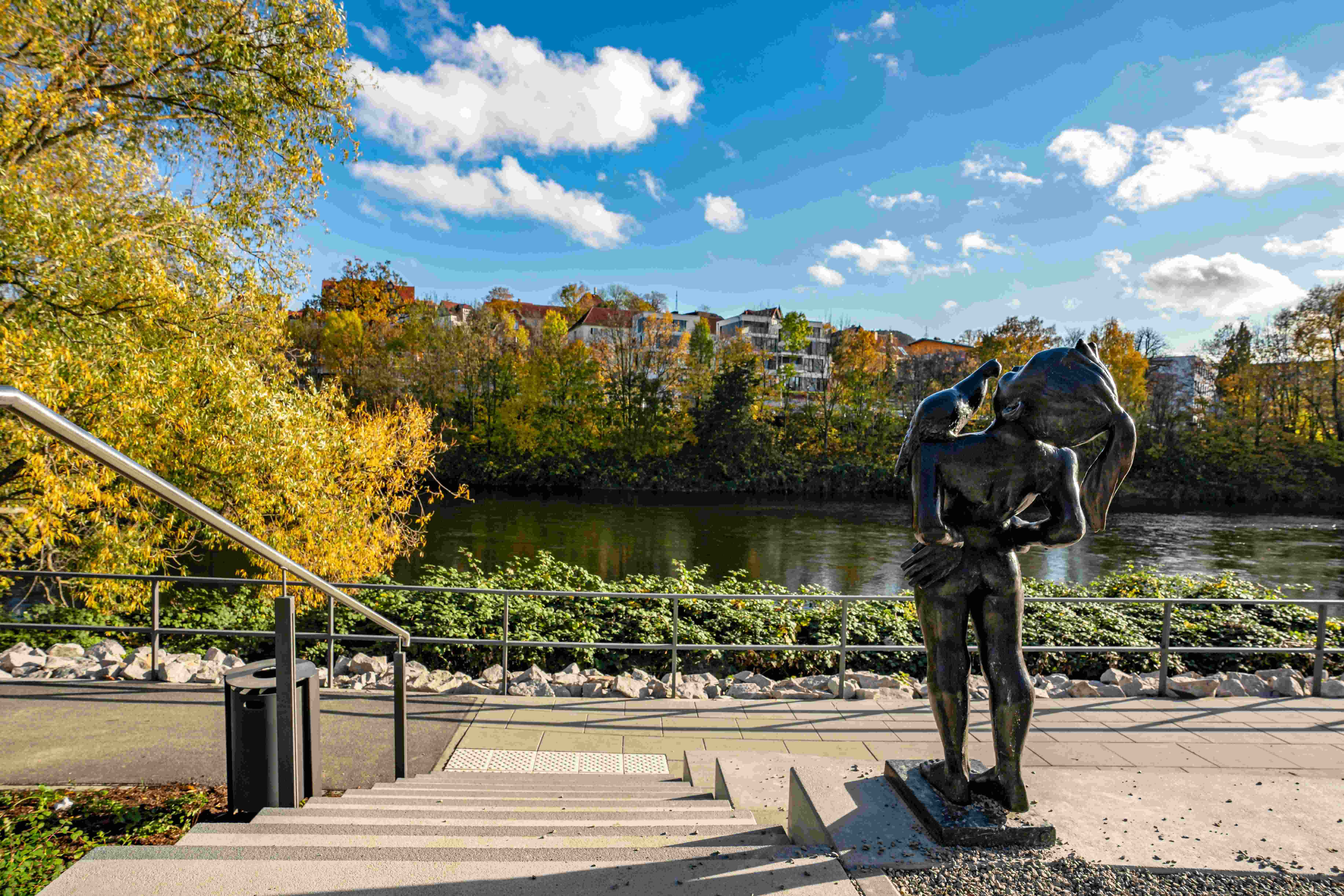 At dhe so-callednland fortress was, with co-financing from the EU and the Free State of Thuringia within the framework of ERDF funding. green citylandscape realized. Here, a small but beautiful part of the park was redesigned. Thisr area isd as exhibitioncontribution to the BUGA in 2021.t. The redesign was carried out under the aspects of a pleasant stay for as many age groups as possible, respect for the natural environment, and therThe new design was created with a view to providing a pleasant place for all age groups to spend time, taking into account the conservation interests of the existing biotope and a smooth route for the Saale cycle path, which is of supraregional importance. This was planned by the Jena landscape architecture firm Boock.

The park is characterized by the alternation of attractively designed places to stay, such as the bastion or the Lacheterand the large, quiet meadow areas. The trees along the Saale and the avenue of lime trees along the railway embankment form a green backdrop.

Visit this park and relax in Jena's green river landscape!

On the occasion of the presentation for BUGA 2021 of thes current interimThe flyer, which was created in 2014 for the mid-term review, was to be updated and reprinted. With this flyer, the people of Jena and their guests can inform about the many individual projects and perhaps also open up new recreational areas.

You can find this new flyer under Downloads under Flyer 2021 "SaaleParadiesJena“.

On the occasion of the mid-term of the implementation of the framework plan, which took place in 2014, a balance sheet was drawn up:

What have we achieved of the original goals? Which projects have been implemented and what still needs to be done? In an information flyer, the projects already implemented and those still to be implemented were described both in a plan and by photo and text. You can find this flyer under the downloads or free of charge in the Jena Tourist Information.

The Saale framework plan, confirmed by the city council on 25.05.2009, takes up the wish of many for a stronger inclusion of the Saale floodplain in the urban offer of recreational areas.

The versatility of this topic is summarised in a brochure entitled "Jena and its river", which can be downloaded under Downloads (framework plan Saale/plans and two text parts of the framework plan) and is available free of charge on request from the Department of Urban Development.